The only known morgue photos of Julia Wallace, clearly showing the wounding, including the strike which opened up her skull. 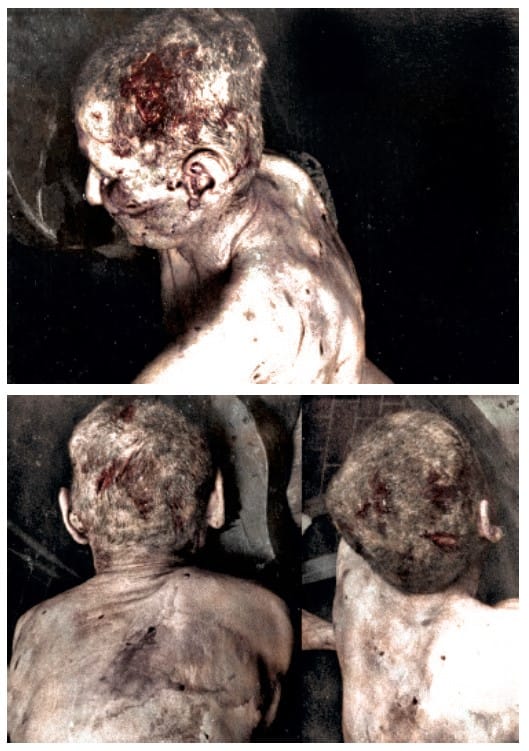 Colourized by Laiz Kuczynski. We both had a great deal of difficulty trying to determine which marks are wounding and which are simply shadowing or photo glitches etc, so this may not be a very accurate representation. In the opinion of a forensic doctor who is the lead forensic advisor for the CSI TV series, the gaping wound was actually caused last. The patterning of the injuries suggests to him that a regular iron bar or anything of that nature was not used. Something with a pattern like a threaded pipe (although he does not think this is from a threaded pipe, it was just an example) is the likely weapon, all blows being struck with the same weapon. The frontal blow being caused by numerous strikes to the same location until the skyll opened up.

“The appearance was as if a terrific force with a large surface had driven in the scalp, bursting it in parallel lines, with the appearance of several incised wounds, but the edges of these wounds was not sharp.”

In attacks with blades a clean cut would be seen instead, which is one way in which forensic experts differentiate between incision and laceration wounds.

The post mortem report by McFall. This report puts her time of death at 19:50, with only 3 or 4 total strikes. Significantly different from his later reports which give a time of 18:00 with 11 to 12 blows.

Not as good as owning Murder Casebook No.25 and an LED magnifying glass, but these photos have been megasized by Topaz Studio AI, so you can zoom very far into the image. Detail may be odd in places as a result of the processing.

Click the images to view in full size, or save them to your device.

This entry was posted in Case Files, Photo Gallery. Bookmark the permalink.