Because Lily Hall’s statement uses the names of roads which have since changed and her statement itself changes, it might be a little confusing, so I have attempted to help the matter the best I can with maps and diagrams.

Lily Hall’s statement is the strongest evidence favouring a conspiracy to commit murder as proposed by Gannon, Waterhouse, and a few others.

I am a typist employed at Littlewoods Ltd, commission agents, Charles Street, off Whitechapel, and I live with my parents at 9 Letchworth Street. I have known Mr Wallace for 3 or 4 years by sight and about a fortnight ago, I learned his name from Mr Johnston, junior, of 31 Wolverton Street. I was there visiting them.

On Tuesday night, the 20th instant, I left business at Charles Street soon after 8 p.m. and took a tram home at the corner of Lord Street and Whitechapel. I got off the tram at the tram stop in Breck Road at the corner of Walton Breck Road. I had arranged to go to the pictures that night if I got home in time and when I got off the tram, I looked at Holy Trinity Church clock, which is near the tram stop, and saw that it was then 8.35 p.m. by that clock.

I came straight home along Richmond Park and as I was passing the entry leading from Richmond Park to the middle of Wolverton Street, I saw the man I know as Mr Wallace talking to another man I do not know. Mr Wallace had his face to me and the other man his back. They were standing on the pavement in Richmond Park opposite to the entry leading up by the side of the Parish Hall. I crossed over Richmond Park and came up Letchworth Street and home. When I got into the house, our clock was just turned 8.40 p.m. but it is always kept 5 minutes fast. It takes me not more than 3 minutes to walk from the tram stop to our house.

The next morning I heard Mrs Wallace had been murdered and when I got home that night, I told my parents that I had seen Mr Wallace the previous night. Mr Wallace was wearing a trilby hat and a darkish overcoat when I saw him talking to the man in Richmond Park on Tuesday night. The man he was talking to was about 5ft 8ins and was wearing a cap and dark overcoat; he was of a stocky build. 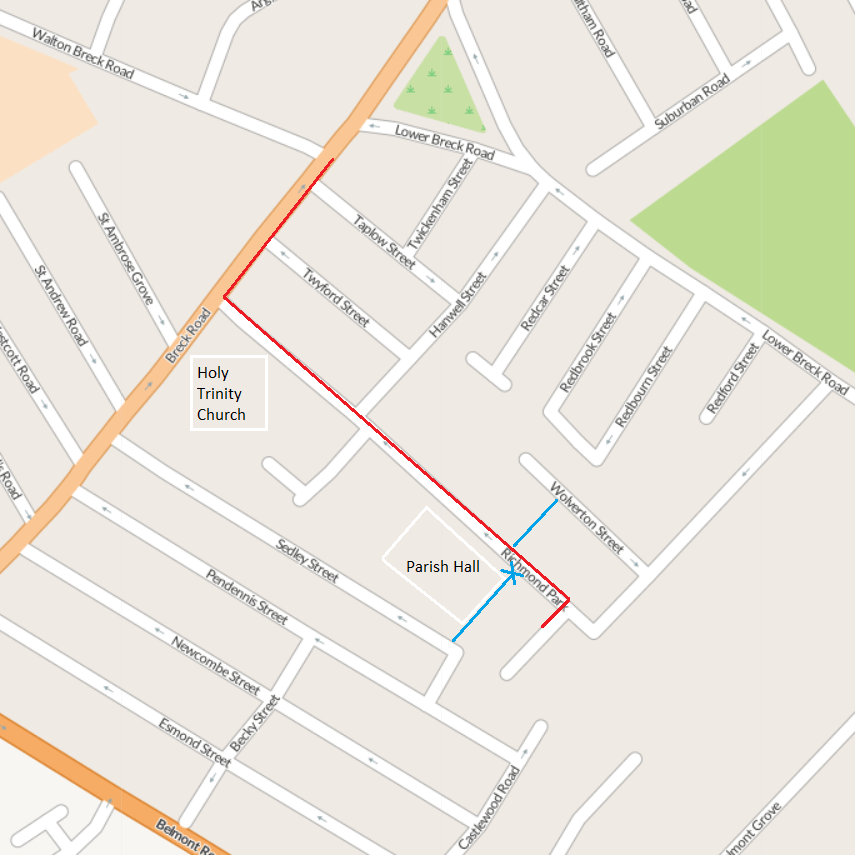 The red line indicates the route Lily Hall took from the tram stop, the blue lines the entries beside Parish Hall and the one that she passed (which leads into the back of Wolverton Street). The blue cross is where she says she saw Wallace speaking to a man.

At this time, in this statement, she does not say that she saw the two men part. This seems to have come later.

Lily Hall at the committal trial (excerpts provided by Gannon):

I am a typist employed by Littlewoods Limited, Charles Street, Liverpool.

I live with my parents at 9, Letchworth Street, Liverpool.

I know witnesses Johnsons who live at 51 [should be 31], Wolverton Street.

The accused and his wife lived next door to them at No. 29. I have known the accused by sight for 3 or 4 years. I last saw him at 8.35 p.m.on the 20th January last at the bottom of the entry by Parish Hall. It is the entry shown on the plan W.H.W.14 running at right angles to Richmond Park, and parallel to Letchworth Street.

I had come from Breck Road into Richmond Park. I was 30 or 40 yards away when I first saw him. I was walking towards him. He was standing talking to a man at the corner of the entry. I was on the pavement on the opposite side. I passed him before I crossed over to the side on which he was. I turned into Letchworth Street.

I was crossing over Richmond Park towards Letchworth Street when I last saw the accused. He and the other man parted as I crossed Richmond Park. One went down the entry and the other down Richmond Park but I do not know whom.. I know it was 8.35 p.m. because I was going to the Pictures and I looked at the clock on Holy Trinity Church as I went past the church.

The man went down the entry opposite the institute.

From a logical standpoint, it makes more sense that as she crossed the road, she briefly looked across and saw the man with her back to her walk down the entry towards Sedley Street, while the other man if it was Wallace would continue moving forward to cross the road (in a slight diagonal in the Breck Road direction) to get to the entry leading to the back of Wolverton Street. If it was not Wallace, then straight up Breck Road.

“They were standing on the pavement in Richmond Park opposite to the entry leading up by the side of the Parish Hall.”

By the rest of her testimony we know she means the entry parallel to Letchworth Street. 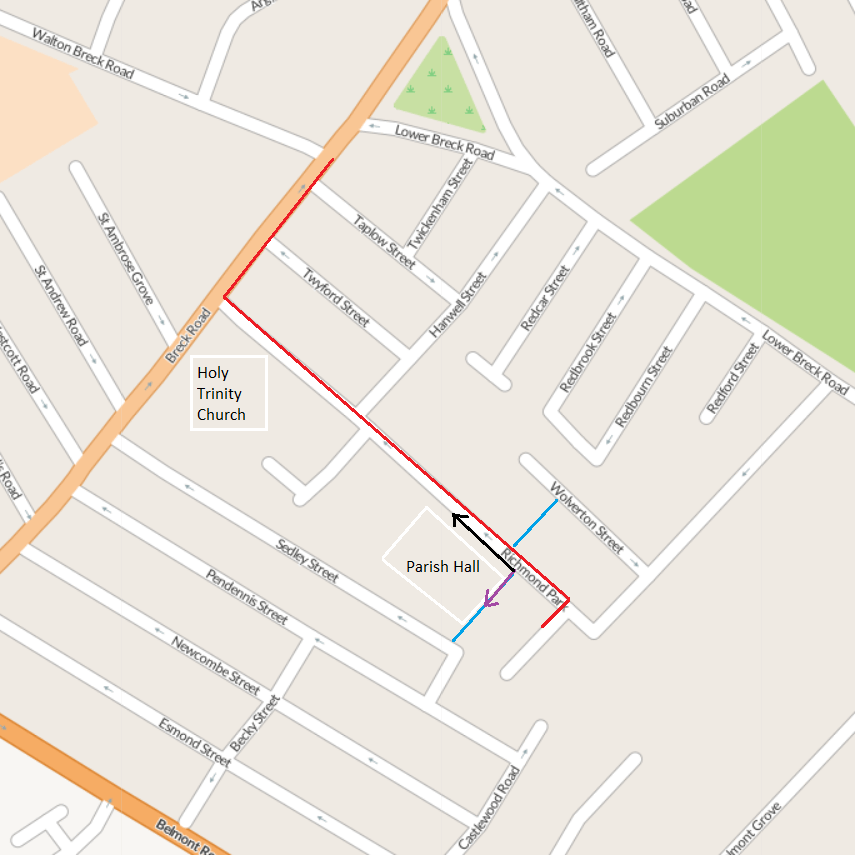 The purple arrow shows where one of the two men went, the black arrow where she saw the other man go as implied at the committal trial.

Aside from the obvious mistakes/confusion about the days and time which you can see in the link above, I will focus on the sighting itself.

Mr. Justice Wright: Which side was he [Mr. Wallace]?

Lily: The side of the entry.

Mr. Justice Wright: Which side were you?

Lily: The passage side.

Mr Justice Wright: Then you had to cross over to get into Letchworth Street?

Hemmerde: Did you then cross over when you passed him…so as to get into Letchworth Street?

Hemmerde: As you crossed over towards Letchworth Street what was the last thing you saw?

Hemmerde: And where had they gone?

Lily: One went straight along and one down the entry.

Hemmerde: One went down the entry and the other in the opposite direction, do you mean?

Hemmerde: Are you talking about the same entry still?

Mr. Justice Wright: Which entry are you talking about?

Lily: The one I was standing by.

Hemmerde: That is right down the little entry down the Church Institute [Parish Hall]?

Hemmerde: Could you see which one went there and which one along to Breck Road?

It does match up with the time Wallace would have arrived home, and she correctly stated that he had been wearing a trilby. She described his overcoat as “darkish”, and though Wallace had in fact been wearing a fawn overcoat on his trip, many other witnesses also described it as being “darkish”.

Statement by Another Witness:

This witness seems to have encountered a man with a similar appearance to what Lily Hall describes, he was stocky and wore a felt hat. Bizarrely, he asked the witness to be directed to 54 Richmond Park, an address which did not exist.

I am 38 years of age. On Tuesday 20 January last I was returning from a Choir practice at St Georges Church Everton, accompanied by a Mr Leak, my Choirmaster. He left me at Anfield Road. I walked down towards the end of Walton Breck Road, and looked at the Clock of Holy Trinity Church which is brightly illuminated. It was then 8.35 p.m.

I walked along Richmond Park and when opposite No 26 Richmond Park but on the other side I was accosted by a stockily built man in a felt hat who had crossed over from the bottom of Letchworth St. He asked me to direct him to No 54 Richmond Park. I told him that number did not exist.

I know both Mr Wallace and Miss Hall, and did not see either of them that night. It was 8.40 p.m when I stepped into my house.