(According to Roger Wilkes, this – like the John Bull articles – was ghostwritten). 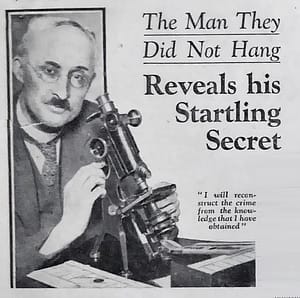 A photo of Wallace with a microscope, from the John Bull articles.

My work, which was not particularly arduous, suited me admirably; the open air and exercise improved my health, and I had sufficient leisure to devote to those scientific pursuits which had always meant so much to me from my earliest years.

I had taken certificates at technical schools for electricity and chemistry. I was expert in the grinding of lenses for my microscopic hobby, and my greatest ambition was that I might make some discovery which would be of benefit to science.

At the Liverpool Technical College I resumed my chemical researches and after two years was appointed part-time demonstrator and lecturer in chemistry. I continued lecturing for five years. My fees I shared with my wife, classifying the additional income as pocket money for us both. My share I spent on scientific books and instruments!

Microscopic photography was an additional interest and earlier botanical studies I extended, making hundreds of slides. In all of these hobbies my wife proved an encouraging and devoted helper, entering wholeheartedly in every one of my pursuits.

This ‘25 Menlove Gardens East’ proving to be an entirely fictitious address, I spent a good deal of time making enquiries from various people because I felt that there might be some error in the taking down of the phone message and, also having come some four miles from my home, I would not leave the district until I had definitely established that no such person or place existed. And why such action on my part should have been construed by the police later as an effort to establish an alibi I cannot imagine. To me it seemed, and still seems, a perfectly natural procedure. 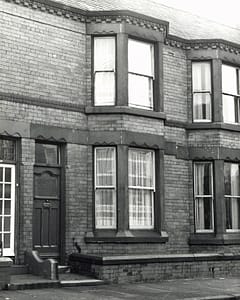 Upon returning home, Wallace seemingly could not gain entry.

Until I returned home I did not suspect the message was a deliberate fake because I was almost certain that some stupid blunder had been made. But on attempting to enter at my front door and finding it would not open, I immediately had a sensation of uneasiness. It was so unusual to find the door bolted. I knocked because I had every reason to believe my wife was in the house, either upstairs or sitting in the kitchen as was her habit. The backyard door would certainly have been bolted for this was my wife’s custom if I was out of the house.

Receiving no answer to my knocking, I went round to the back and found that though the backyard door was shut it was not bolted. I could not, however, gain entrance to the back-kitchen door. Again I knocked and still there was no reply. The thought crossed my mind that my wife might have gone out to the post but then I recollected she had rather a heavy cold and certainly would not have risked going out of the house. Thereupon, my uneasiness increased. It was such a totally unusual experience that I could not enter that a vague alarm seized me.

Again, I tried the front door with no better result. Coming once more round to the back, my neighbours, Mr and Mrs Johnston, came out of their house, apparently to take a stroll. “Good evening,” I said, “Have you heard any unusual noise or anything in our house during the last hour or so? I’ve been out on a business call and I find both doors locked against me and I can’t get into the house.”

It was clear as daylight to me that whoever had sent the phone message to the chess club had done so purposely to get me out of the house the following night when I was likely to have a substantial sum of money in my cashbox. It was equally clear that he must have been well known to my wife, for otherwise she would not have admitted him. I could imagine this man of mystery, who masqueraded under the name of Qualtrough, watching me leave my house on the Monday night and board the tramcar going city-wards, then slipping into the nearby telephone booth and sending that message to await my arrival. This fact convinces me, also, that his voice must have been familiar to me because, evidently, he was not risking my being at the other end of the line.

Again, the next night he would be lurking outside my house and again he would watch me leave and board a tramcar. My movements would convince him I was off to that fictitious address, 25 Menlove Gardens East, and that I was safely out of the way for a length of time sufficient for his purpose. 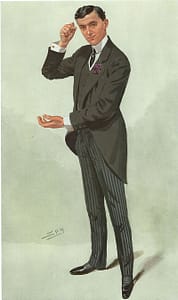 Mr Hemmerde outlined the case against me. It all sounded so futile, so absurd, so much a waste of time. The very idea that I could raise my hand to any woman, and particularly my wife, was monstrous. The main contention of the police was that I had sent the telephone message to myself at the chess club to set up an alibi the following night. That, without the shadow of any conceivable motive, I had murdered my wife using an iron bar or a poker which couldn’t be found…

Another puzzle was the fact that my mackintosh was found under the shoulders of my wife, badly burnt at the bottom and heavily bloodstained. The front of my wife’s skirt was also burnt and the prosecution saw no way out except that my wife, being struck, had fallen onto the gas fire. But if the murderer was wearing the mackintosh how had it become burnt also? I was surprised as much as anyone and could not agree with my counsel that my wife had thrown it around her shoulders to go to the door to admit – whoever she did admit. It was a thing I had never known her to do and could not imagine her doing. But I confess my poor brain could invent no other possible alternative to that theory. I can’t imagine what the murderer was doing with it or how it came to be burnt unless it was worn in some way by my wife…

I had to sit in that dock and listen to this weaving of coincidences, suggestions, theories, and ifs – none of which had the slightest weight of evidence – without being able to reply in any way or protest. A hundred times I wanted to shout out a refutation of some vile suggestion. It seemed to me then, and still is, a firm conviction that the prosecution was vindictive and pressing every conceivable and inconceivable point with malevolence… every point in what was called evidence against me fitted the alternative theory of the crime having been committed by some other man whose motive was, obviously, robbery.

Wallace held by his arms by companions as he leaves the court of appeal a free man.

My case, I understand, is now the only one on record in which a jury’s verdict in a murder trial has been reversed on point of fact.

I am, too, I believe, the only man condemned to death for whom prayers have been offered in an English Cathedral. So perhaps my sufferings have been worthwhile. At least, I have made history!

I am free to live, to take up – if it were possible – the thread of my life. But there is a brutal murderer at large. Who is he? Where is he? Who was that man of mystery in the telephone box? Who was this masquerader, Qualtrough? Who was this man of blood whose face must have been familiar to my poor wife and whose voice would have been recognised by me? Who was it who knew the routine of my business and exactly where I kept my weekly collections of cash? Who plotted this vile crime and was content to let an innocent man go to the gallows in his stead? There is an old saying that ‘murder will out’… Time alone will tell.