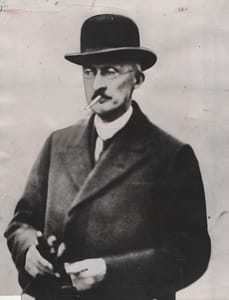 I was born in the year 1878. We lived in the Lakeland district and my early days were spent in that glorious country of mountain, lake and fell. What dreamed I, a happy innocent child — of all the horrors which were to meet me forty years further down the road of Life? At fourteen years of age I was apprenticed, for five years to the drapery trade.

After several assistantships in various towns, the wanderlust which had obsessed me in earlier years grew to fever heat, and at the age of twenty three I sailed for India, to take a position as a salesman in Calcutta. Sentenced to death for a third time by a council of doctors, I had to leave India, and seek the milder climates of China. In Shanghai I worked as an advertising Manager for a general store. My illness however, reached its climax, and I made up my mind to leave China and return at once to England.

If I had to die I preferred the land of my birth as my final resting place. I arrived home seriously ill, and entered Guy’s Hospital. My weakness prevented me from doing any work at all for eighteen months, but my financial position becoming somewhat precarious, I took a situation in Manchester. During this time I had begun to take an interest in politics, addressing meetings in all parts of the North Lonsdale Constituency. To my delight I was eventually appointed Liberal Agent for the Rippon Division, West Riding, of Yorkshire.

Here began the happiest years of my life, for in Harrogate I met at this time my future wife. She was a lady of good birth and social position, whose tastes were very similar to my own. Dark haired, dark eyed, full of energy and vivaciousness, she filled in every comer of the picture I had dreamed of that one woman in all the world most men enshrine in their hearts. She was an excellent pianist, no mean artist in water-colour, a fluent French scholar, and of cultured literary taste. The courtship lasted two years and was idyllic. From the first moment we met we found in each other friendship, companionship and love we needed.

Those were days when all the world and the future seemed rose coloured, sun-like and steeped in everlasting happiness. Nothing could ever change! But through this Eldorado of a lover’s dream the wheel of fate was turning, turning …

A blissful year of marriage preceded the outbreak of the Great War. We set up house in a quiet neighbourhood of Harrogate, little dreaming of the maelstrom that was destined to uproot us within a few months. The war crashing into our quiet lives brought politics to the ground, and I was once again thrown on my beam ends. I was fortunate in securing employment as a district agent with the Prudential Assurance Company, and my wife and I moved to Liverpool, taking up our residence at 29 Wolverton Street.

Here we lived in perfect happiness and harmony for sixteen years. Our days and months and years were filled with complete enjoyment, placid perhaps, but with all the happiness of quietude and mutual interest and affection. Neither of us cared very much for entertaining other people or for being entertained; we were sufficient in ourselves. My wife had an artistic natural love of colour, landscape, seascape, and flowers to appeal to her and I looked at all things with the eyes of a naturalist.

As a young man I had played chess. In Liverpool I continued this pastime, and the only times alone in our little home was to visit the chess club at the City Café, to deliver my lectures at the technical college, or to attend to my insurance business. On all other occasions my wife was my inseparable companion.