A man named Robert Carr very persistently pressed for his testimony to be taken into account. He claims to have seen William Herbert Wallace with his sister-in-law Amy Wallace at Scotland Road at 8 PM on the night of the murder.

The Great Wallace Murder Mystery
Should The Murder Have Been Solved Certainly?
The Truth, The Whole Truth and Nothing But The Truth
By One Who Knows
I have reasons to remember the night when Mrs Wallace was found murdered because something very strange happened the same night in Scotland Road Liverpool
A man in company with a woman stopped me and asked could I direct them to the landing stage
I said you are going the wrong way and offered to put them on the tram at a stop close by
The man turned to the woman and said
We. Must. Not. Go. On. The. Car.

She never replied to him but closed her eyes as though she was in great fear.
They realized I was weighing them up the man was shall I say abnormal because his brain seemed concentrated on something he said they would walk and asked me the way
This man was carrying a newspaper rolled up length ways in the left hand
While they was crossing the road he took out his watch and also looked at a clock opposite it was 8-10 PM
I stood on the pavement wondering whether to follow them or not
the next day I read of the murder of Mrs Wallace and wondered if the persons I seen in Scotland Road the night previous was in any way connected with it
After reading the Echo on the night of

the coroner’s inquest I came to the conclusion it was my duty to inform the Police of my experience and went round to ask a C.I.D. man to come round to my place and I would make a statement
He came and I told him all and also signed a statement for him
This officer done his duty.
At a later date Wallace was arrested and charged with the murder of his wife.
During this trial I rang up on two occasions from Haymarket Liverpool the C.I.D. Office Dale St to ask if my statement had any bearing
I was told Inspector Moore was out and had not left any message
During the trial at St Georges Hall I went down to Dale St and stated I wanted to interview the Chief Constable regarding the Wallace Murder Mystery

I was taken to the Chief C.I.D. Office and interviewed by Inspector Wallace of the C.I.D. we discussed the murder and I told him my statement had perhaps some bearing on the mystery. He agreed with me and asked would I go over to St Georges Hall and he would ring me through to Inspector Moore and Inspector Gould
I went over straight away to St Georges Hall and was told that they was both in the witness box and could not see me neither did either of them communicate with me after. Why? they must have known my address and statement
After Mr Wallace was found Guilty by the judge and jury then I went round to see the police again because while the appeal was pending the Empire News gave a photograph of Wallace which I said favoured the man I spoke to in Scotland Road on the night of the murder

It was a blurred photograph I told them so and asked to see a distinct one or better still an Identification Parade
I was told why worry we have got him
We now come to the day of Appeal when the Court of Appeal squashed the judge and jury verdict of Guilty and set Wallace free
now let me say this the papers was full of photographs of Wallace the very man that spoke to me in Scotland Road Liverpool the night of the murder at 8-10 PM
A newspaper poster ad in big print something to the effect the then Chief Constable was not satisfied. I again went over to the C.I.D. Office and told Inspector Wallace that the photographs in the papers was the very man I spoke to in Scotland Yard on the night of the murder

He replied well Bob they have made a – of it. I was under the impression that you gave evidence at the trial
I was told to wait they would get him again before long certain
Wallace then wrote his story in John Bull The Man They Did Not Hang and ended up his opening with next week “Women Are My Worst Enemies”. the opening of the second John Bull revealed the tragedy
It gave three Photographs
Mrs Wallace the murdered woman
Himself the man that spoke to me in Scotland Road the night of the murder and also the sister-in-law the very woman with Wallace when I spoke to them and Wallace said We. Must. Not. Go. On. The. Car.

I read and study Wallaces story now in one passage he says
I stood with my violin beside the piano above which hangs my wife’s photograph I closed my eyes and tried to make myself believe she was again occupying the piano seat the chord quivered broke and was lost violin and bow dropped limp in my hands
no wonder
He completes his story with
I Know The Murderer.
I press again to try and bring the matter up but in vain
I am told to wait.
Result. Wallace dies and Chief Inspector Moore stated in the Empire News they never had any other clue to the murder and although such a long time had elapsed they would open the case again

I went down again to the present Chief Constable with a note from a gentleman well connected in Liverpool over my statement and their Blunder
The Chief Constable was beyond doubt engaged and I was sent to the C.I.D. Office again. I was seen by Inspector Wallace and I signed a fresh statement which I was told would have to go through the Director of Public Prosecutions and later I was told try and forget all about it Wallace is Dead
therefore we cannot do anything now it is too late.
I said I would if only the police would keep these papers from continually referring to the Wallace case out because it always brought the thing back to me they agreed

Then I read of a book to be published
I Know The Murderer
History of the Trial of William Wallace
I replied to that with a letter as follows
The Great Wallace Murder Mystery
I know the murder
Dear Editor why not publish the following and let the public know the whole truth not only of the trial of William Wallace but also the blunder made by the police
If only I had been called as a witness the murder would of been solved beyond doubt and proved the judge and jury Verdict to be one of Guilty
It was suggested at the trial Wallace planned the murder like a game of chess making every move very careful and sure of winning the game
“He Did and Won at the Finish.”

If the police had only played the game and used all their men against him at the trial they would have trapped him
Why then under such circumstances should the public be gulled with a book called
The Trial of William Herbert Wallace
this man has gone to his grave therefore either let him rest to receive judgement in the next world or let us start the trial all over again
not tomorrow but today
Signed
Justice Wanted
I received a reply as follows
Dear Sir
The appeal court having decided as it did it is not possible to give your letter.

I again go round to the C.I.D. Office to see if they could prevent the book being published under the circumstances
I was told they could not it was only a book and again asked to forget all about it
while he Wallace was dead.
Then I read in the Empire News
Sunday November 5th, 1933
Wallace Accused Me! [ This is the letter to the press written by Gordon Parry that this man refers to ]
narrated to Paul French
What. A. Shame.
now Mr Paul French and also the Editor of Empire News
I beg of you to publish the whole story enclosed and help to clear the shadow from the man that William Herbert Wallace Accused and prove his innocence

before I close would you please add the following
my opinion is this that had Inspector Wallace of the C.I.D. had full charge of the case from the beginning, the murder of Mrs Wallace would have been Solved
Signed
By One Who knows

The Empire replied as follows (Copy)
Mr Robert Carr
Dear Sir – Thanks for the communication herewith the editors have given the matter careful consideration and have decided to say that had the matter been taken up when you first brought it to the notice of the police the result of the Wallace trial would have been different
The Home Office however has no power to order a fresh trial because a trial must have a defendant and the only defendant possible is dead. We congratulate you on your perseverence and observation in this case which proves you have an intelligence above the ordinary
In view of the decision of the Home Office we find it impossible to print your article and return it with Thanks for allowing us to see it
Faithfully yours P French For the Editors

Shock in my opinion she was always afraid and terrified that Wallace would murder me if knowing I made a statement against him and his Sister-In-Law
I now appeal to you dear sir
In fairness to all involved
to bring the matter up without delay
I Remain
Yours Truly
Robert Carr
18 Moss Grove
Lodge Lane
Liverpool. 8.
P.S. I omitted to state I went to the press and gave them a statement “The Echo” while the appeal was pending they did not publish it. Why? 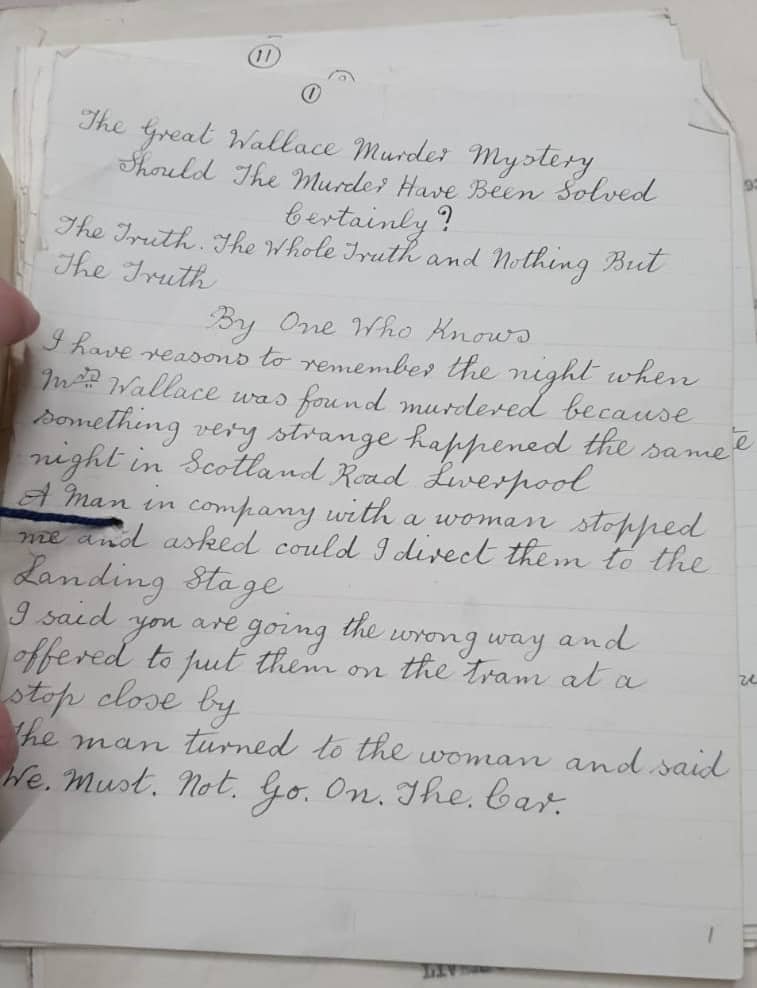 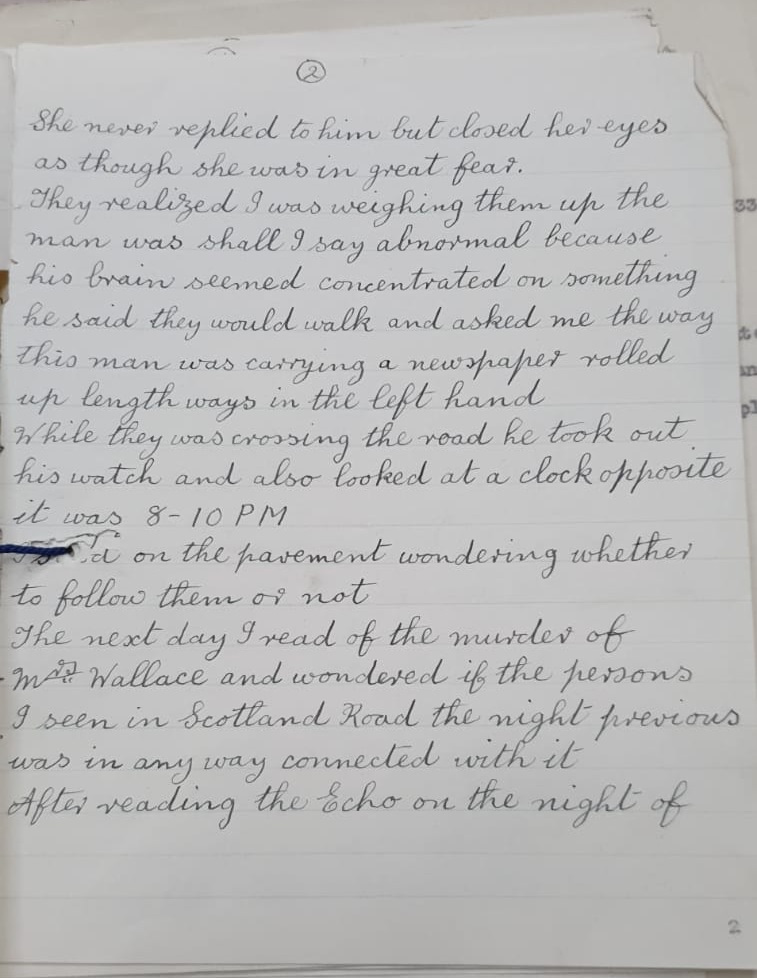 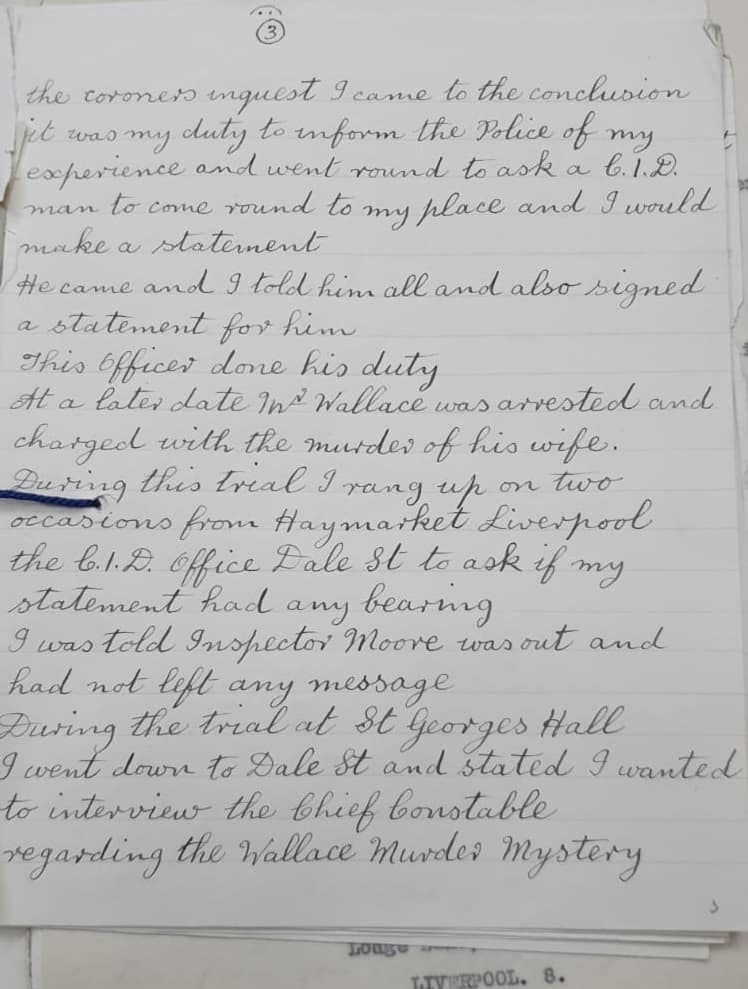 Uncertain of the chronology of the following correspondence:

Transcription of the above letter:

Sir John Gilmore
Dear Sir
I sent documents to the Director of Public Prosecutions on the 17/11/33
asking for the “Wallace Murder Mystery” to be either reopened or failing that for a court of inquiry to clear the matter up owing to the negligence of the police in failing to call myself as a witness at the trial. I received a reply dated 20/11/33 to the effect he was unable to deal with it.
I now apply to you dear Sir asking you to get the documents from the Director of Public Prosecutions and that you will take the matter up without delay
I believe in justice therefore I shall hope to hear from you by return of post
I Remain
Yours Truly
Robert Carr