The statements of Richard Gordon Parry, courtesy of John Gannon.

I live at 7, Woburn Hill and I am an inspector employed by the Standard Life Assurance Co., 28 Exchange Street East. I have known Mr. and Mrs. Wallace of 29, Wolverton Street since September 1926, by being in the employ of the Prudential Assurance Co., of which Mr Wallace was an agent. In December 1928 Mr Wallace was off duty ill, and I did his work for two weeks. On the Thursday of the first week, and on the Wednesday evening of the second, I called at his house to hand over the cash, and settle up the books.

The first time I called Mrs Wallace gave me a cup of tea and some cake while I was waiting for Mr Wallace to come downstairs. It was about 10.0a.m. and I waited in the kitchen. I had been to Mr. Wallace’s house on several occasions prior to December 1928 on business matters for my superintendent, Mr. Crewe, and had also called several times after that date on similar business. I always looked upon Mr. and Mrs. Wallace as a very devoted couple.

The last time I called at Wallace’s was about October or November 1929, and then I called on business for Mr. Crewe. The last time I saw Mr. Wallace was about three weeks ago on a bus from Victoria Street. I got off at Shaw Street. I know that Mr. Wallace is very fond of music, he plays bowls, and I have seen him at the City Cafe in North John Street; he is a member of a chess club which has its headquarters there.

I am a member of the Mersey Amateur Dramatic Society and previous to the production of “John Glaydes Honour” on November 17th 1930, at Crane Hall, we were rehearsing at the City Cafe every Tuesday and Thursday. It was during these rehearsals that I saw Mr. Wallace at the City Cafe on about three occasions. I did not know previously that he was a member of the Chess Club there.

On Monday evening the 19th instant I called for my young lady, Miss Lilian Lloyd, of 7, Missouri Road, at some address where she had been teaching, the address I cannot for the moment remember, and went home with her to 7, Missouri Road at about 5.30p.m. and remained there until about 11.30p.m. when I went home.

On Tuesday the 20th instant, I finished business at 5.30p.m. and called upon Mrs. Brine, 43, Knoclaid Road. I remained there with Mrs. Brine, her daughter Savona, 13 yrs; her nephew, Harold Dennison, 29, Marlborough Road, until about 8.30p.m. I then went out and bought some cigarettes – Players No. 3, and the evening Express from Mr. Hodgson, Post Office, Maiden Lane, on the way to my young lady’s house.

I have heard of the murder of Mrs. Wallace and have studied the newspaper reports of the case and, naturally, being acquainted with Mr. and Mrs. Wallace, I have taken a great interest in it. I have no objection whatever to the police verifying my statement as to my movements on Monday the 19th and Tuesday the 20th instants. 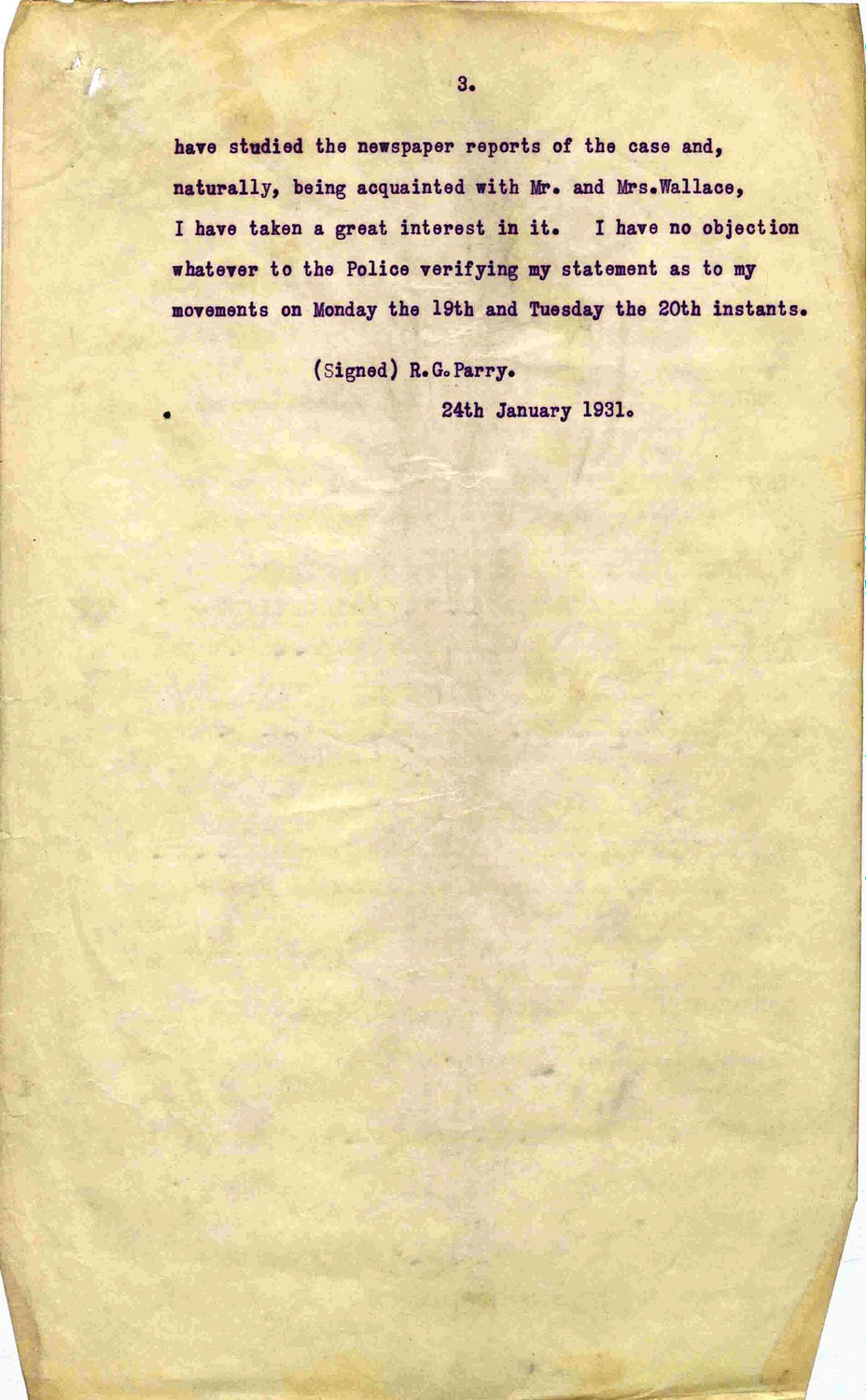