I am a widow, and live at 38 Tollerton Road. I have known Mr. and Mrs Wallace at 29 Wolverton Street for about nine months. I have been going to their house every Wednesday morning to do the cleaning since I have known them. I was recommended to them by a friend of theirs, Mrs Jenkinson, 112 Moscow Drive, for whom I did cleaning. Mr. and Mrs Wallace were very devoted to each other as far as I could see, and I never knew them to quarrel. The last time I was there was a fortnight ago to-day, that was the 7th of January,1931.

I used to clean the house right through and I was paid 2/6d for the half day. Mrs. Wallace used to help me. I have not been for two weeks because I lost my husband and yesterday morning I sent a postcard and let them know that I was not going to them to-day. I never answered the door when I was there and I do not know any of the people who called when I was there.

During the time I worked for Mrs.Wallace I remember that on about 3 occasions people have called and she had taken them into the parlour and stayed with them for a few minutes and let them out. I never saw any of the people but I know they went into the parlour because I could hear them. (In Margin: Mrs Draper Then went to 29 Wolverton St with me.)

There used to be two small steel pokers in the kitchen fire-place, one was about 1 foot long, that is here now, the other was about 9 inches, this one is missing, it had a small knob on it. There was a straight piece of iron kept in (the) ^parlour fireplace, it was about 1 foot long [12 inches] and about as thick as an ordinary candle. That is missing (In Margin: Last seen on Jan. 7th).

I used to clean the front bedroom and the bed was always kept made with blankets, sheets and pillows. Mrs. Wallace used to have her hats spread out on it. I have never seen the bed in the state it is now. As far as I know there was nothing the matter with (the) lock on the front door of 29 Wolverton Street. The catch on the back kitchen door was defective. When the knob was turned either from the inside or the outside, it would not bring the bolt back from the lock socket. This happened pretty regularly and on many occasions I have had to ask Mrs Wallace to open the door for me and she used to do it by gripping the spindle close to the door. There did not seem to be any spring in the lock. 1637. Are you a widow living at 38 Tollerton Street? Tollerton Road.

1638. How long have you known the accused and Mrs Wallace? Nine months.

1641. I think the last time you went before Mrs Wallace’s death was on the 7th January? Yes.

1644. Did you find anything missing that you had been used to finding there? Yes.

1645. What was it that you found missing? A poker out of the kitchen.

1646. How large a poker was that? About nine inches long.

1649. Did you also notice something else was missing? Yes.

1650. What was that? A piece of iron out of the sitting room fireplace which was always kept there.

1651. Can you give us any idea of the size and thickness of it? Perhaps it might help you if you would look at a few things here to give you some idea, because measurements are always vague?

1654. Shaped like that sort of thing? It was a bit rougher than that.

1657. Do you know what it was used for? For cleaning under the gas fire.

1658. I suppose cigarette ends and things get in? Yes, and spent matches.

1661. MR HEMMERDE: Do you remember particularly when you last saw it there? On the 3rd January. [Saturday, usually goes once a week on Wednesday?]

1662. What makes you remember that particularly? I used it that morning.

1663. For what? Under the gas fire, to find a screw that had come of the gas bracket.

1664. You mean to rake for a screw which had come off the gas bracket? Yes.

1665. It was a screw off the gas bracket which you were trying to get from under the fire? Yes.

1666. Who was there when you were doing that? Mrs Wallace.

1667. Used it to stand up there? Sometimes it stood by the fireplace and sometimes it was laid underneath the kerb.

1668. Was it there the whole time you were attending at their house? Yes.

1670. You say it stood up where it could be seen and other times it was close under the kerb? Yes.

1671. Do you know which room the Wallaces generally sat in: was it the kitchen which they generally used for living in? Yes.

1675. Did they ever use the sitting room while you were there? No.

1677. All you know about their habits is from when you were there? Yes.

1678. They got on pretty well together, as far as you could see? Yes, I always found them on pretty friendly terms. 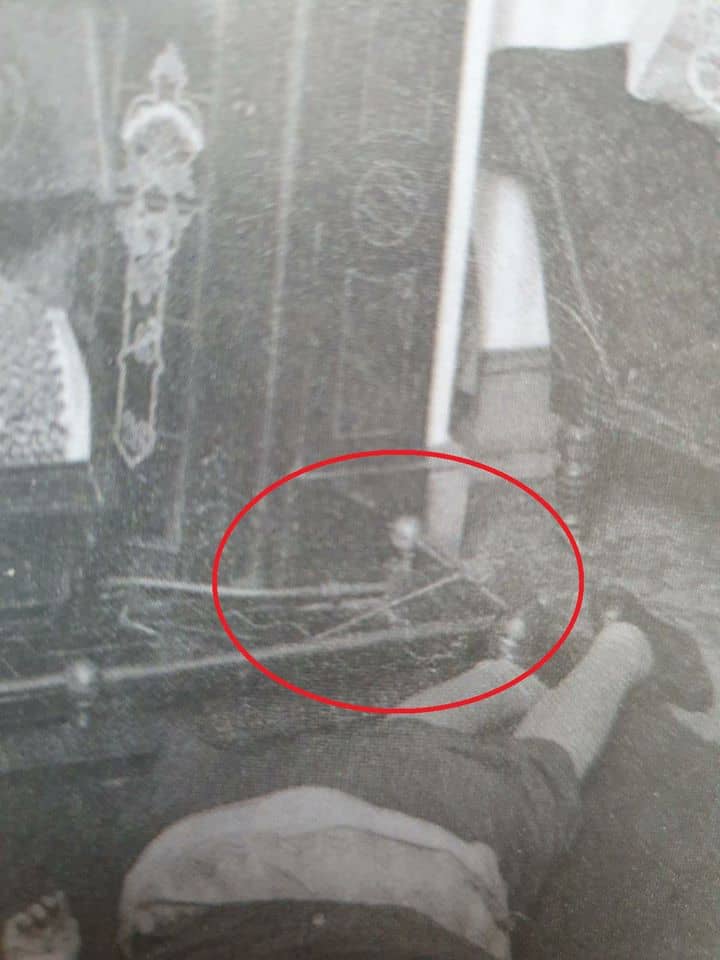 Some sort of rod is on the fender near where the iron bar would be kept. This object appears to have a handle/knob on it, and therefore may be the missing poker from the fireplace, used as a substitute for the lost iron bar when Mrs. Wallace had cleaned under the grill.