A list of facts about the specifics of the case. I have left out the obvious details: 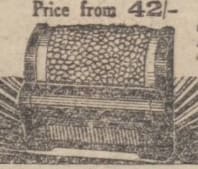 A Sunbeam fireplace, possibly the same model as owned by the Wallaces. The violin case seen here resting across the arms.