Letters to Munro RE: Police Corruption (from a Police Officer & His Wife)

Please forgive me the liverty I take in writing you. It is perhaps presumption on my part to make suggestions to you in the Wallace case, but I cannot help feeling very strongly on the matter.

You were quite right in censuring the Police re their pocedure and conduct in the case. Our Police Force in Liverpool is far from what it should be, it is corrupt, and consequently is inefficient. I happen to know through my own husband’s service in the Force, and when any one endeavours to bring matters to the notice of those who could bring about a cleaner administration of justice, it is suppressed.

The men who have conducted the case for the prosecution, have sadly erred,- nno person is safe when such weak evidence can hang a man. I do hope that you will make every effort to make a “strong appeal” on the poor man’s behalf.

Professor Mc. Fall suggested, in fact sserted frenzy, how could it possibly be reconciled with his statement of premeditation?

For my part, I would construct the case as follows:-

Someone who knew Wallace and his movements, desired to get him out of the way, not with the object of killing Mrs. Wallace, but to make conditions easier for robbery,- probably they needed money. Had someone gone to either the back or the front door to engage the poor woman in conversation, whilst an accomplice got in by the other entrance? She may have placed the coat over her shoulders, owing to her having a heavy cold. It is quite possible that she would feel cold standing at the door, and would ask the person inside, or probably she may have heard a noise, and left the caller to see what it was she had heard, and in consequence came face to face with the intruder, who, fearing exposure, and not having time to get away without being seen or known, would strike a blow, and fear would want to make them finish off their poor unfortunate victim, to prevent their identity becoming known. Probably that accounts for the reason that the door did not at first open.

Was the criminal or criminals inside when Wallace returned? Did they make their escape whilst Wallace as at the front door, endeavouring to get in? Again the evidence of the Johnstons’ (sic Johnsons’) seems to have been taken by the police without very much question.

Either Mr. or Mrs. Johnston noticed very minutely Wallace’s actions and every room that he went into, but regarding Wallace’s statement, that he had to unbolt the front door, to admit the Police, the Johnston’s did not notice whether he did or not.

Did the police go into the Johnston’s house to see whether there was any clue? If not, why was not every channel pursued?

I will give you an instance related to me some years ago by a Constable’s wife:-

A lady whose husband was in business in this City, desired his wife to go with him to the theatre one evening, they had about £40 in the house at the time, and the wife did not feel like going out, when such a sum was in the house, however the husband insisted on her going with him. When nearing the theatre his wife said “I am very uneasy and am going back”. When she arrived home her first act was to rake the fire out and get a blaze, and as many do, left the poker in the fire.

Her attention was drawn to a noise at the front door, a hand was through the letter box with a piece of wire trying to pull back the catch. She got the poker from the fire, and branded the intruder’s hand with it, and immediately afterwards, in terror, rushed by the back door into the next door neighbour’s house, only to find her neighbour bandaging her husband’s hand.

Whilst in the Wallace case I am not going to suggest any particular person, I do think that there should have been a closer investigation of those who were first in the house after the Wallace crime. According to the evidence it appears just as suspicious for the next door neighbour, before knowing that anything very serious was the matter, to have so carefully noted the exact movements of Wallace when he was able to gain admittance. Then again, was it not stated in evidence that when Wallace admitted the police, he had to withdraw the bolt, but this Mrs. Johnston did not notice.

It seems grossly unjust to accept the evidence of the neighbours, who seemed to have spread the gossip which has undoubtedly prejudiced the Jury. It is most unfair that a jury are able to gather their first impressions from the Press and common gossip. I again state that under the present regime our Force is corrupt, and under such circumstances, the British Public should be urged to compel the proper investigation into Police Administration in this City, if our citizens are going to be able to rely upon an efficient Force.

I know that there is a very grave state of gross corruption in our City Police, which strongly effects efficiency of same, and it is very necessary to bring pressure on the Home Office to intervene. It is not my husband’s fault that this has not been done.

I again apologise for what may appear interference, but under the circumstances I feel that no stone should be left unturned to put a very grave state of affairs right.

I am,
Yours respectfully 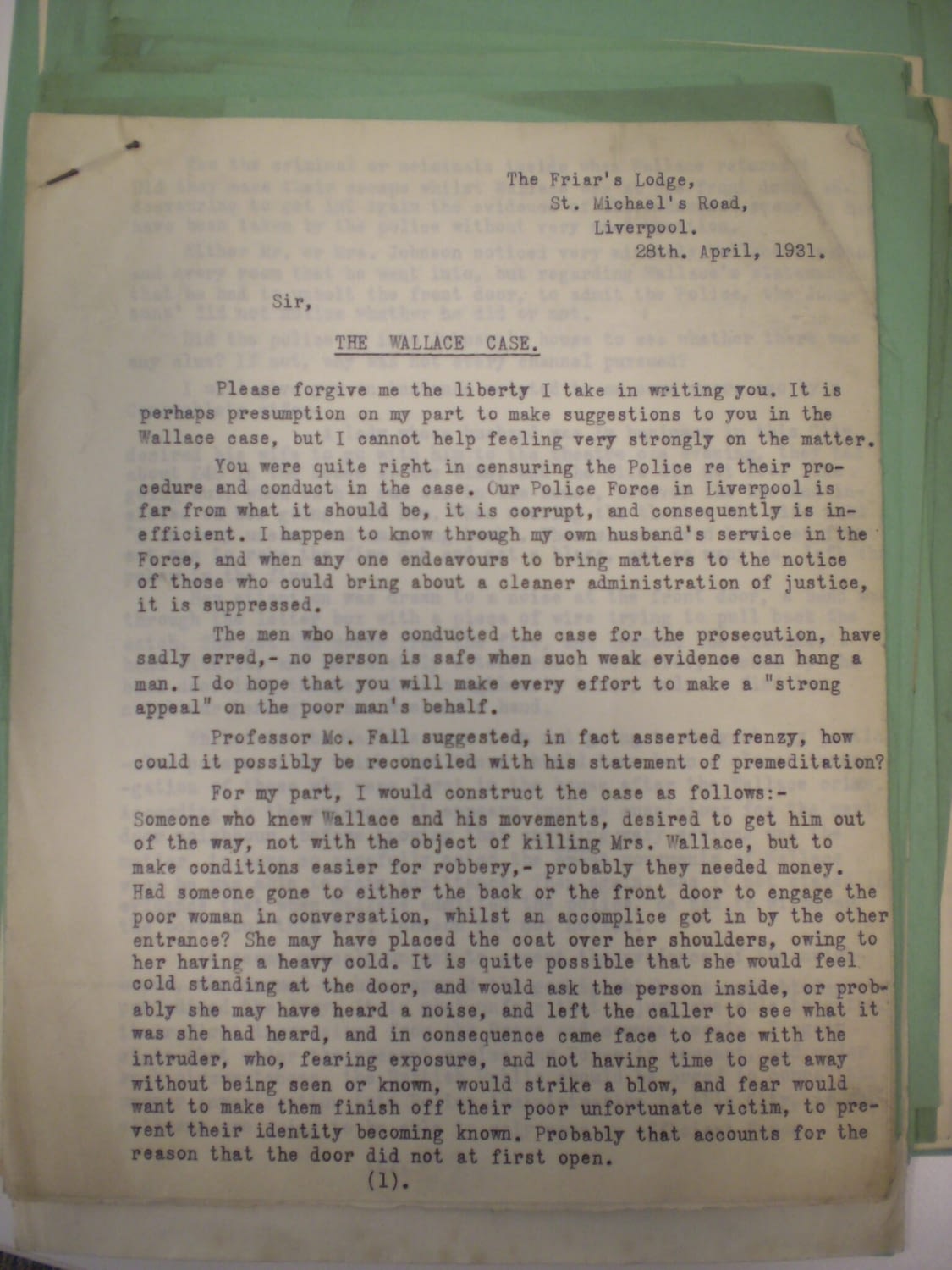 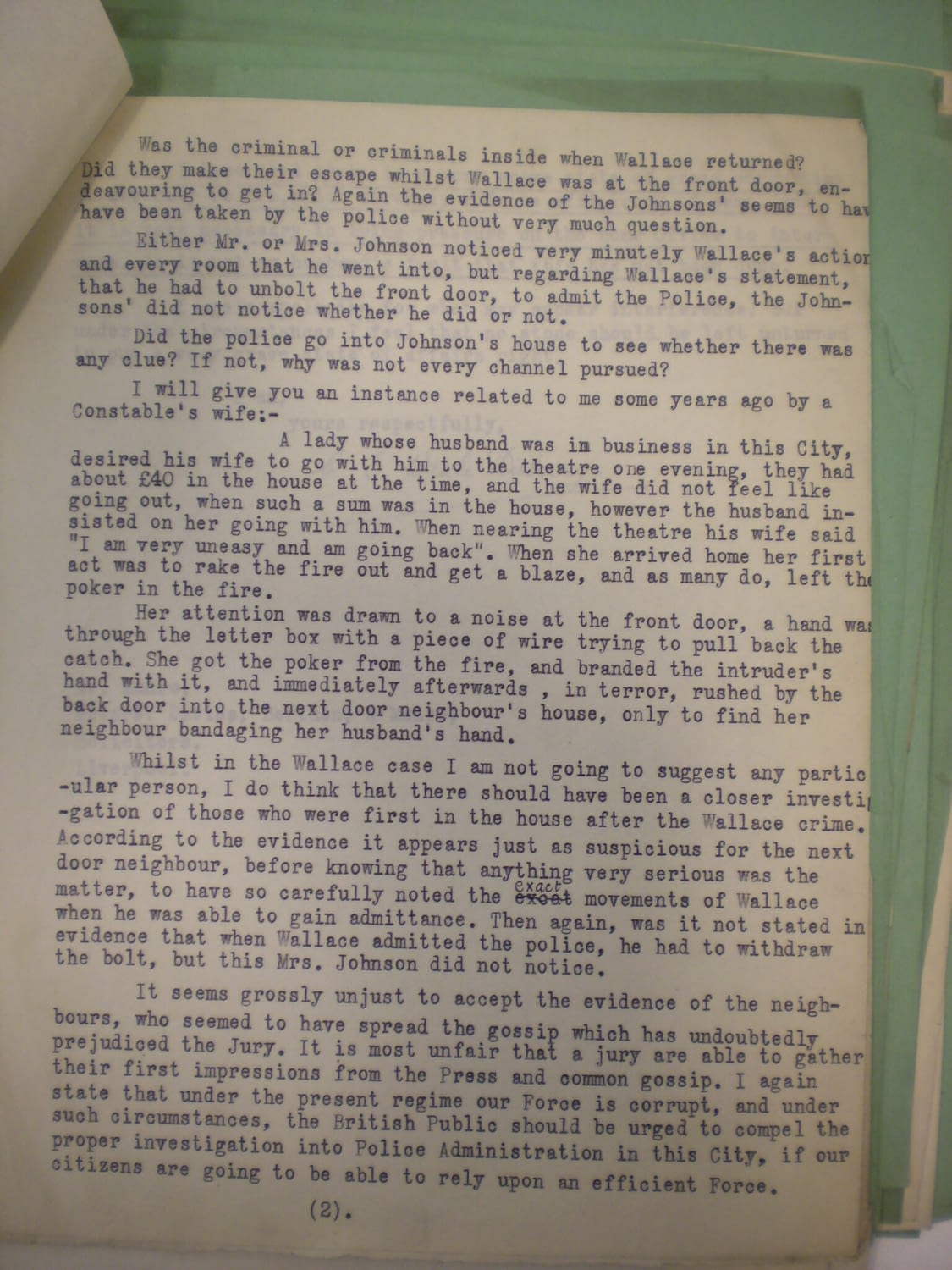 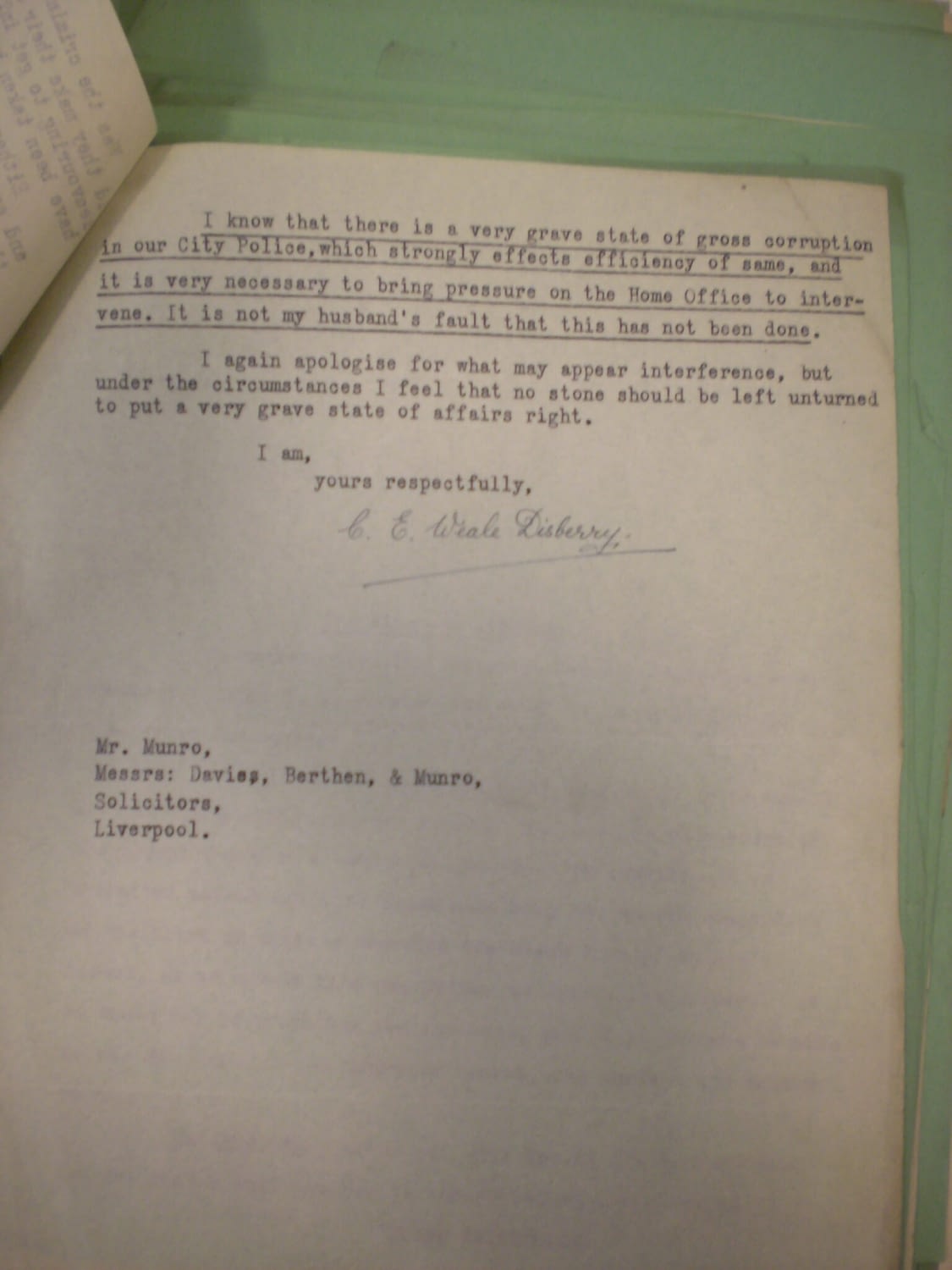 I would like to associate myself with my wife’s remarks on the Wallace Case, which has aroused such wide spread iterest and comment, not only in our City but throughout the Country.

The jury’s verdict on the evidence and the Judge’s summing up, is to say the very least, sensational, and wholly unwarranted.

However, on the question of corruption in the Liverpool City Police, which Mrs. Disberry has mentioned, can we possibly have an efficient Force when promotions are paid for, Etc?, and especially when those in authority take no notice.

In fighting my case with the Local Authority here, I informed no other than a Member of the Watch Committee, and Chairman of a Sub-Committee at that. Some time ago, when I was dealing with the Home Office, I mentioned the fact of gross corruption here, but I rather think that it went no further than one of the Permanent Officials.

When such an issue is at stake as a man sentenced to death, I take the courage, nay I have no hesitation in placing these facts before you, which I think ought to be brought to the notice of the Attorney General, and the Principal Officers of the Crown.

I can only trust that it may be of some service to you, in any case I am going to see the corruption question through, at whatever cost to me or mine.

May success crown your efforts in the Appeal.

I am,
yours respectfully