I reside with my mother at the above address & am 19 years of age. I have known my uncle William Herbert Wallace practically all my life. I have been away from Liverpool for long periods at boarding school, but except for these periods of absence I have been in close touch with my uncle & his wife. They were most decidedly a very happy & contented couple and I never saw any quarrels between them or anything other than an atmosphere of mutual trust and happiness. They were not very well off, but they were comfortable, & never had any financial difficulties that I know of. They lived at Wolverton Street during the whole time that I knew them. My uncle is very keen on biology & chemistry, & those interests absorbed him. Up in the upstairs back room he had a Laboratory where he used to spend a great deal of time up to the last two years. My Aunt rather objected to his being up in the back room as she said it was to cold & damp for him, as he was not strong, and she had to go to a great deal of trouble to look after him. There was no hint of ill feeling about this.

During the last two years my Uncle became very keen on music, and developed the violin so as to accompany his wife on the piano, which she played very well. My uncle took a great deal of trouble with the violin & had lessons (Book) My uncle never came to our flat alone, but he & his wife used to exchange visits with my mother & they were as often at our flat as we were at their house. Roughly speaking we saw them about once a week, and when we went over to their house they would play for us for an hour or so in the evening. They always seemed perfectly happy with each other. So far as I know, my uncle was not out very much at night, except for hi Winter visits to the Chess Club. I should say that neither he nor my Aunt were very strong in health; she was mainly troubled with her chest. I can say very emphatically that I never heard any suspicion expressed as to my Uncle’s sanity.

The last time I saw my Aunt alive was on Sunday night, 18 January last. I & my mother were at their house from about 7 to 11pm, & everything was perfectly normal, the atmosphere being, as usual, one of content & happiness. Looking back on the evening , I can see nothing whatever abnormal about it. They played to us in the usual way & there was a good deal of conversation.

About 10pm on Tuesday evening the 20 January I & my Mother were in our flat in Ullet Road when some people a young man and woman came & told us that Mr Wallace had sent for us very urgently as something terrible had happened at 29 Wolverton Street. We went at once by taxi & found two or three motor cars drawn up outside the house, & police about in the road. They told us to go in by the back way, & we walked in to the kitchen & then in to the back room, where I found my Uncle sitting crouched over the fire. place very very agitated. He was awfully upset, & had his handkerchief to his eyes, as he was crying profusely. Someone told me that my Aunt had been murdered. I understand that my Uncle had been given brandy. My Uncle was able to speak to me, & said the my Aunt had been hit over the back of the head, & that his locker had been smashed. (I saw this for myself in the back room, & half the door of the locker was lying on the floor) I told my Uncle I was terribly sorry, & he said “yes, I realise that, nothing said at this time can help.”

He continued to be terribly upset all the time we were there. My Mother said he must come to stop with us that night, we being the only relatives present, & I said “yes, most definitely you should.” Before we left, he was taken away by the Police, & he only arrived at Ullet Road about 4.a.m when the Police came too, & took a statement from my Mother.

Next day my Uncle again had to go to the Police. He did not come back to us that night. At about 6.30 I & my Mother were at the Liverpool Lime Street Station, to meet a relative coming from Yorkshire , a Miss Amy Dennis, one of my Aunt Julia’s sisters. My Uncle was there too, & I understand he had asked permission for this from the Police who had been interviewing him all day. Miss Dennis was going to stay with us, & as we had only two bedrooms there was a discussion as to how everybody would be put up that night. Ultimately it was left to my Uncle to decide whether he would come to us that night. He was still very deeply upset, & seemed distraught, several times he said to me “What a friend I have lost.” Later he also said “ If you get as good a partner in life as I had, you will do well.” These last mentioned words were said to me when he & I were walking back from the office of his Superintendent near Byron Street, on Thursday of that week, I think I went with him on that occasion so as to keep him company and help him as much as possible.

My Uncle did not come back to us on the Wednesday of that week although we really expected him notwithstanding that it had been left indefinite. Afterwards he stayed with us until the time of his arrest. He seemed deeply grieved throughout the whole time. Sometimes, in the middle of saying something, he would burst out crying. He & I went together to the funeral on Saturday, & during the Sermon in the Church he was crying a little.

This interest in Music came to supersede my Uncle’s interest in the Laboratory.
EHW [Edwin’s initials, marked at several points throughout the statement] 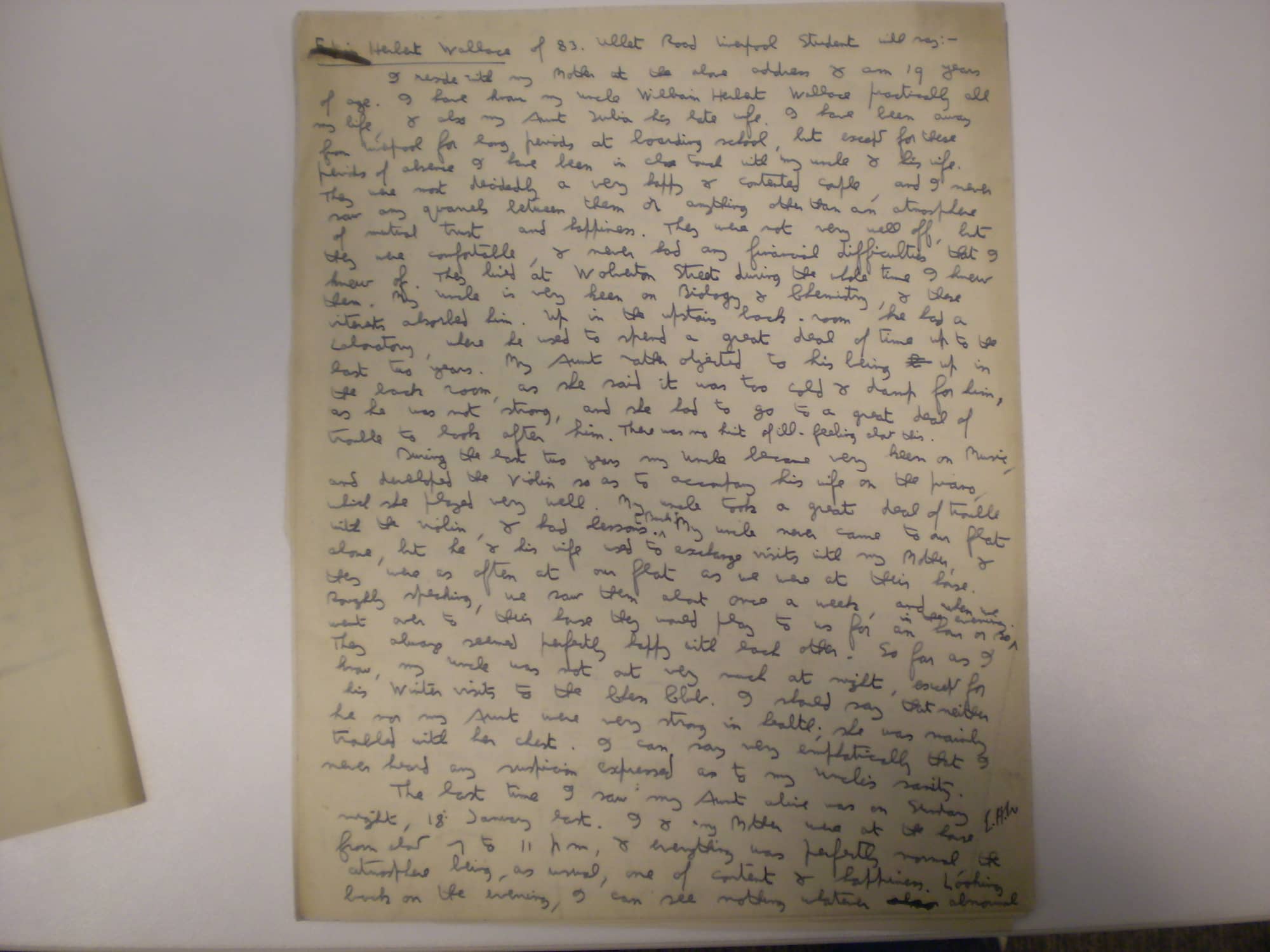