Myth #1: The caller and killer are definitely the same person

One of the “accepted facts” of the case, for both the defence and the prosecution, was that whoever placed the telephone call to the chess club was obviously the same person who murdered Julia.

In reality, there is nothing whatsoever to substantiate such a claim. It is entirely possible the caller is a different person than whoever killed Julia Wallace; and even that the call is entirely unrelated (a prank call was speculated by novelist P. D. James).

Of course, it may very well be that the caller is indeed the killer, but a fundamental flaw in the investigation of this case stemmed from that faulty logic.

Jane Sarah Draper (charwoman to the Wallace’s) stated that an iron bar was missing from the parlour. It was claimed in a book by Johnathan Goodman that years later, residents who moved into the home found a rusty iron bar beneath the fireplace.

However, I have heard it said that at the time, the police took the fireplace unit out of the wall, so whether or not this was the same bar that was claimed missing is uncertain.

Myth #3: Only someone admitted by Wallace or Julia could have entered the home

Around the time this crime was committed, the security of locks was not what it was today. There were several “housebreaking” gangs operating around Liverpool using duplicate or skeleton keys. One such gang of youths were found with a large set of such keys they had crafted using a file.

At an earlier time, a man named Mr. Cadwallader (deceased at the time of the murder) had, while drunk, entered the Wallace’s home at night using the key for his own house. He wandered up to the Wallace’s bedroom startling them, before realizing his error and leaving.

While William Herbert Wallace told everyone that it was his wife’s “rigid rule” to not admit into the home anyone she did not know, this claim has been disputed by his sister-in-law Amy Wallace. In a statement she unwittingly gave to the press (who were posing as police detectives), was published, stating as such:

“Mrs. Wallace was one of the most peaceful and loveable of women. In fact her kindness was perhaps her only fault. Her husband, my brother-in-law, was perhaps nervous of her being all alone at home at night, as they had no family, and had told her more than once not to open the door to strangers.” – Amy Wallace.

Amy stated that she believed if anybody had knocked at the door, given how cold it was, Julia would have invited them in.

Myth #5: William Herbert Wallace was a master at chess

Much is made of Wallace’s skills at chess, and how this may have factored into the murder if he is guilty. However, many who knew him and played against him have gone on record as saying that he was in fact a very poor chess player.

In the John Bull articles Wallace states that he has matched his mind against the greatest chess players on the planet. While this is true, what is not mentioned is that these were “simultaneous exhibition matches” (where a chess grandmaster plays many opponents at once), and Wallace was soundly beaten.

He was also only in the 2nd class chess league, which was the middle league in terms of skill. His friend James Caird was in the higher 1st class league.

Myth #6: Richard “Gordon” Parry had no alibi for the murder

This alibi covered him from 5.30 PM until 8.30 PM on the night of the murder. The milk boy claims to have seen Julia alive at 6.30 PM, while Wallace was seen outside his home (apparently unable to get in) at 8.45 PM.

If the alibi is true, then Parry, after leaving Olivia Brine’s house at 43 Knoclaid Road, would have to drive to 29 Wolverton Street, gain access, and murder Julia, within a space of 15 minutes. Considering the driving time alone would be about 5 minutes with him parking directly outside the home, this would give him just 10 minutes.

Myth #7: Gordon Parry’s girlfriend – years later – claimed she had pushed back the time Gordon arrived at her house

This one is true.

According to Johnathan Goodman, Lily Josephine Moss Lloyd (Parry’s longtime girlfriend), after her relationship with Gordon ended, told Wallace’s solicitor Hector Munro that she had falsified the time of the murder night alibi for Gordon, and that she would sign an affidavit attesting the fact.

When Munro was interviewed by Roger Wilkes in the 1980s however, he said he did not remember such an encounter. Wilkes then set about tracking down Lily Lloyd. When quizzed, she herself said that she did indeed tell police he had arrived at her home earlier than he really did.

However Gordon Parry’s alibi for having committed the murder did not hinge on Lily Lloyd, but on Olivia Brine. Gordon claimed that he had been with Lily Lloyd much later in the evening, some time around 11 PM.

It appears she had kept in contact with Gordon up until his dying day and said to Wilkes that although she did falsify the time, she is sure he is not the killer and that he had never said anything to her that would have suggested he was.

Myth #8: The parlour in which the body was found was free of blood spatter

Due to the very poor quality photographs online, it often appears that the walls are completely clean of any splashes of blood. This can cause confusion when reading accounts discussing the extensive blood spray up the walls reaching as high as the ceiling. In higher quality photographs, the blood spatter can be seen.

See the dark spots to the left of the following photo for example – which do not show in 99% of photos floating around on the web: 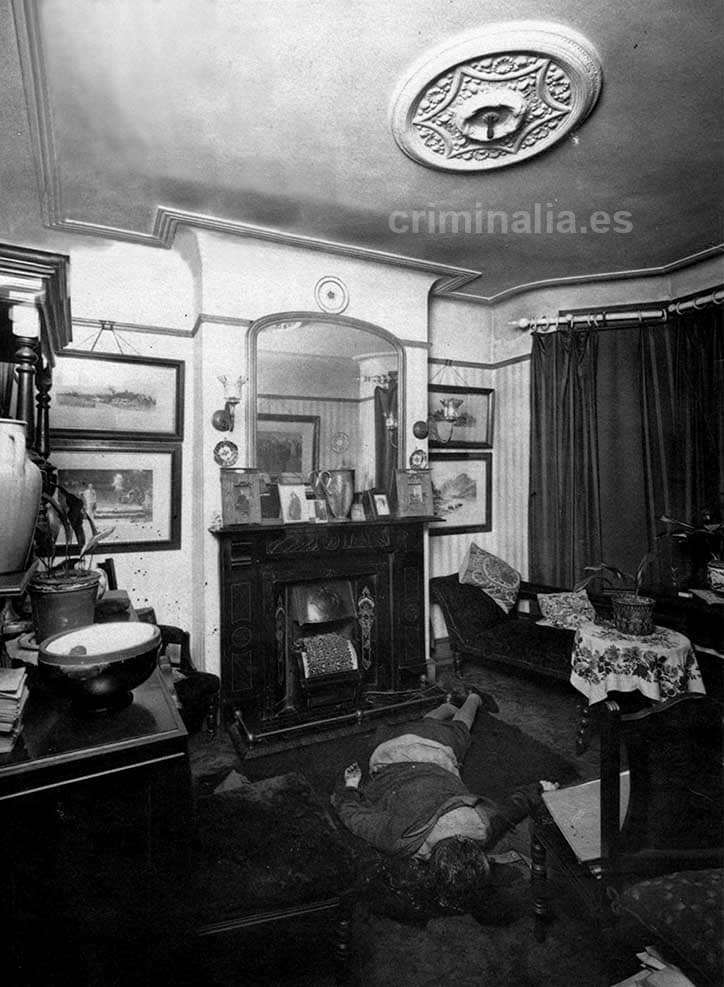 Myth #9: Wallace wrote a cryptic anagram about his wife’s murder in his diary

However in reality, the author is very much real; Wallace simply made an error in his spelling.

The author Wallace refers to is “J Leys” (John Kirkwood Leys), and based on his interests it seems possible the book he is referring to is “A new natural history of birds, beast and fishes”. Although that book was released in 1886, 1889 may have been a reprint – but I will need confirmation on that point.

Gannon’s document on the case (which is certainly more of a research document than a book) contains a number of very crucial errors which could swing someone’s view of the verdict and therefore must be addressed. The manuscript is so long I will have to update it as I go and edit more in:

This entry was posted in General. Bookmark the permalink.